The most common air pollutants include carbon monoxide, ground level ozone, nitrogen oxides, particulate matter, sulfur oxides, and volatile organic compounds. There are other pollutants that are important both due to their impact on the environment and on public health. We will take a look at two such pollutants, ammonia and hydrogen sulfide.

At room temperature, ammonia (NH3) is a colorless gas and an irritant with a pungent odor. The main sources of ammonia are natural. In the environment, NH3 is part of the nitrogen cycle, being produced naturally from decaying  organic matter, including plants, animals and animal wastes. About 10% of naturally occurring ammonia is thought to be a result of wildfires. Ammonia is also one of the most commonly produced industrial chemicals in the United States. The vast majority of produced ammonia is used as fertilizer. Other applications include use as a cleanser, a refrigerant gas, and in the manufacture of plastics, pesticides, and other chemicals.

So how does NH3 affect the environment? The ammonia released into air is associated with a localized unpleasant odor, which is detectable even at low concentrations. Low concentrations of ammonia in soil are normal and required for plant nutrition, however multiple issues arise as the concentration rises. Excessive NH3 can harm vegetation and is toxic to aquatic organisms. Over-fertilization can lead to excessive levels that then leach into groundwater and other water sources. Too much NH3 in the air can enter the surface waters following rainfall leading to algal blooms due to over-enrichment. These can occur at great distances from the original source of the NH3.

Ammonia gas also impacts the environment through interaction in the atmosphere with other gases. The primary products of these interactions are fine particulates (PM2.5) and ammonium (NH4+) aerosols, which can negatively impact human health as respiratory irritants (img source). Unlike the relatively short life of NH3, both PM2.5 and NH4+ exist in the atmosphere for days and can be spread over hundreds of miles. Recent research has studied the role of ammonia as a key ingredient of smog. A study conducted by 6 universities and a variety of state and federal agencies looked at the smog that can linger in Salt Lake City. With mountains encircling it, the basin city is susceptible to “inversions,” where a high pressure system traps colder air in the city. In their research, they found the smog was mostly composed of PM2.5. About three-quarters of the particles were made up of ammonium nitrate. (read more on the Wasatch Front Ammonia and Chloride Observations (WaFACO) study)

The monitoring and reduction of ammonia is becoming increasingly important, as levels continue to rise globally. The European Environment Agency recently noted that while most air pollutants are showing reduced levels, the levels of ammonia, primarily from agricultural sources, have continued to rise each year for the past four years (EEA Report). Between 2014 and 2017, the levels increased 2.5%, despite 21 of the 27 EU countries being below the current ammonia emissions ceiling set out in the NEC Directive (2016/2284/EU). There is concern that without a significant reduction of the allowed ceiling, far fewer countries will be able to meeting the full reduction commitments for 2020 and 2030. In early 2018, the United Kingdom announced an air quality plan that includes reducing the nation's ammonia emissions from agricultural sources by 16% by 2030.

While the EU is looking to slash the ammonia emissions, the United States has not made limiting ammonia a priority. They have instead targeted other key smog ingredients, including nitrogen and sulfur oxides (from combustion sources) as well as particulates. There are a number of reasons for the lack of regulations. US agriculture-related groups argue that it would be a burden for them to monitor and report these levels while the lack of routine measurement makes setting regulations difficult. With research now beginning to show the role of ammonia in particulate levels, U.S. regulators could face increased pressure to act.

Hydrogen sulfide (H2S) is a colorless gas best known for its characteristic odor of rotten eggs. The most common sources of emissions are oil and natural gas extraction and processing. Industrial sources also include petrochemical plants, coke oven plants, and paper mills. Natural emission sources make up 90% of atmospheric H2S (ATSDR 1999) and include geothermal fields as well as bacterial decomposition of human and animal wastes in anaerobic environments. For this reason, H2S is present in the emissions from sewage treatment facilities and landfills. 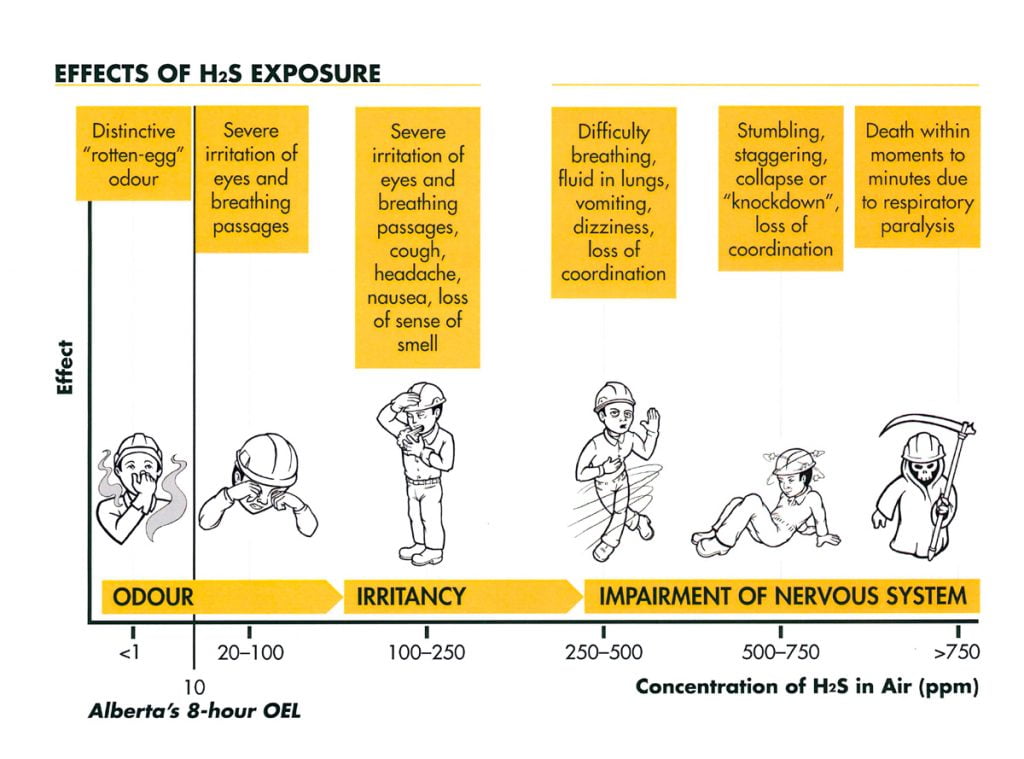 H2S can cause respiratory and cardiovascular irritation with early symptoms of eye irritation as well as headaches, nausea or vomiting even at low levels. At concentrations above 700ppm, hydrogen sulfide can be fatal, causing respiratory paralysis and unconsciousness which lead rapidly to death (Beauchamp et al. 1984; img source).

H2S is a major component of the sulfur cycle. It is oxidized in the atmosphere to form SO2, which can then be converted to sulfate through several different pathways. H2S contributes to acidic deposits by forming sulfhydric acid when dissolved into water. Though not directly involved in climate change, its conversion the atmosphere to sulfate contributes to the cooling influence provided by atmospheric sulfate.

When compared to NH3, H2S emissions are quite low. Sources of H2S are largely from manure storage. In the US, some states have property line H2S standards while others have standards for the purpose of odor control. The US EPA does not have a federal standard, though the U. S. Occupational Safety and Health Administration has set an 8-hr average occupational standard of 20 ppm.

Laboratory or Field Applications of Ammonia and H2S

With the impact on public health and the environment, it is no surprise that there is a great deal of research being done with H2S and ammonia. In addition, there is a high demand to accurately calibrate analyzers or GC used in monitoring these gases. US EPA Method 15 outlines the determination of H2S from stationary sources.

Due to their “sticky” nature, it is important that the gas flow management system, whether a gas mixing or gas dilution system, be properly configured. Environics S4000 Gas Mixing Systems and S4040 Gas Dilution Systems are custom built and are easily adapted for use with ammonia and H2S. These units are ideal for higher concentrations or when mixing of multiple gases is required. Units can be configured to operate with cylinder and to also allow for the use of permeation ovens for those who would like the option to use permeation tubes as the gas source. Proper seal selection and glass-lined (silconert) plumbing are also important to minimize adherence and maximize a unit’s operational longevity. For lower level calibration, the Environics S6100 Ambient Calibrator can be configured with a separate “Ammonia Circuit.” This allows low level ammonia and H2S calibration while protecting the ozone generator from contamination.